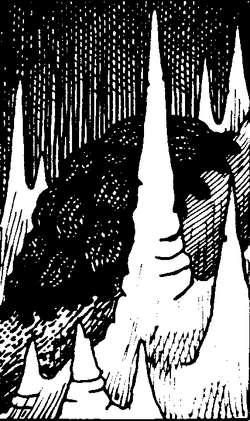 is one of several underground hazards in the world of Dungeons and Dragons.  From Monster Manual I, this first edition entry could be found underground looking to eat.  Able to dissolve wood and metal, it was a creature not to be laughed at.

“It is a scavenger/hunter found only in underground areas normally.  … have color variation, grey, brown, and white being not uncommon.”

To define the Black Pudding is as ambiguous as the manual’s description of it.  According to the tome, its only found underground “normally”.  Meaning, you could encounter it elsewhere.  So much for “only”.  It’s “black” but likely be grey, brown, or white.   It’s difficult to distinguish its purpose different from other single-celled lifeforms similar such as the Ochre Jelly or the Gelatinous Cube.

Inspired by the artwork, Black Puddings were reserved for caverns untouched by engineering or architecture.  Disguising as shadows or a dark pool, they usually mind their own business until the warm-blooded comes too close.