With every classic Scooby villain there is one that is not so.  We take a look at some we wish could have been better.  Here are 5 lamest villains from Scooby Doo, Where are You!

The Ghost of Zen Tuo from “Mystery Mask Mix-Up”

Why it failed?
Zen Tuo (featured above) was nothing more than a smug jewel smuggler in costume.  Virtually no back story other than his so-called emissaries of the dead.  He relied on pigeons to manage and organize crime.  Is this really the best San Francisco can offer?

The Phantom of Vásquez Castle from “Hassle in the Castle”

Why it failed?
Other than nuisance trespassing, Bluestone the Great, didn’t do all that much.  Dressed in a queen-sized bed sheet, he couldn’t even operate a telescope correctly.  Boil it all down, he told the gang to leave and never come back and ends up in prison.  A rare example, the unmasked villain is more interesting than his alter-ego.

The Ghost of Geronimo from “Decoy for a Dognapper”

Why it failed?
Poorest theatrics of any villain, The Ghost of Geronimo posed himself as a Native American windigo that happens to speak excellent English while using manufactured arrows.   Though we love Scooby and would never want to see him harmed, the episode had one of the most overreaching mystery in history.  All this trouble for a dog show?

Mano Tiki Tia from “A Tiki Scare is No Fair”

Why it failed?
A true wooden performance, Mano Tiki Tia brought as much suspense as a staring at a television during a blackout.   With almost zero imagination, the great god was literally wheeled in during his scenes.  Even the magic of animation couldn’t hide those wheels under his feet. 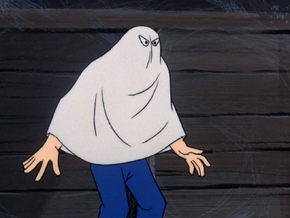 Why it failed?
The picture says it all.  We think the writers just gave up.  At least Zen Tuo had character.

Tagged: Scooby Doo Where are You!, Scooby villains